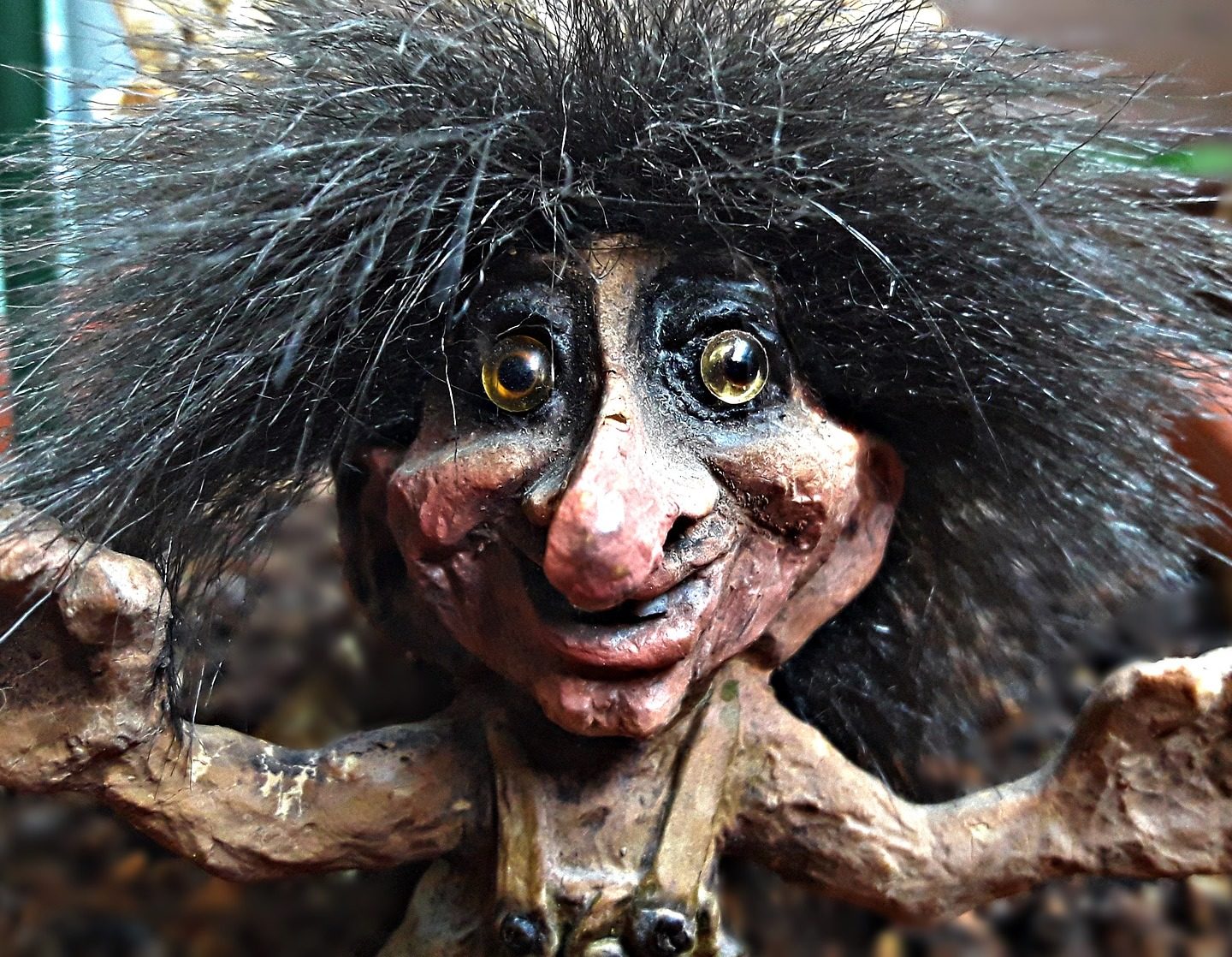 Recently, two separate people called something myself and other Fedora Design Team members worked on “crap” and “shit” (respectively) on devel list, the busiest and most populous mailing list in the project. 💩💩💩

Actually, I’ve been around the internet a long time, and I have to say that this is an improvement in terms of the rudeness being applied towards the work specifically, and not the people!

Yeah ok, but, we clearly still have a lot of work to do on basic decency. It’s not Fedora, it’s not the free and open source community, it’s not the internet – it’s people. Maybe people at a communication scale for which we’ve not quite evolved yet. Let’s talk about one way we can think about approaching this issue moving forward.

(* I realize I used the term “trolls” in the title of this post, and I wouldn’t consider this scenario an intentional instance of trolling. However, this post is about a framework and not this specific scenario, so I use “trolls” as a more generic term.)

What about the Code of Conduct?

Codes of conduct set a baseline for expectations, and we certainly have one in Fedora.

Well… I’m a parent, and we know well that simply having a set of rules doesn’t mean it will be followed. Nor does enforcing consequences for violations of said rules neatly and cleanly ensure future compliance.

No, what is critical is how you respond to the transgression, both as the rule-setter but importantly also as the target.

I’m not saying codes of conduct don’t work. I’m just saying that they are not the whole solution!

I’m not blaming the victim and saying they’re responsible. I’m just saying if they want to, there are things they can do and laying them out.

Alright. Cool. So…. how do you respond to the transgression? You and your team spent weeks, months working together on a project, and now it’s getting, well, 💩 on. What then?

I have been working through a University of Pennsylvania online course on resiliency that was recently made free as in beer due to its applicability in the COVID-19 pandemic we’re all dealing with.

(Yes, internet trolls really are not as dire as some of the issues many of us are going through right now that this generous offerings was meant to try to help – death, sickness, food insecurity, job insecurity, isolation, and more. But no, there’s no reason why we couldn’t apply the framework taught in the course on something stupid like trolls as practice for the heavier things!)

The course is called Resilience Skills in a Time of Uncertainty and it is taught by Karen Reivich who is a professor at the University of Pennsylvania. She is an engaging instructor and the course materials are put together extremely well. I’m going to walk you through what I’ve learned so far, directly applying it to the devel list 💩 party as an example so you can see what I mean by suggesting resiliency as a piece to the puzzle of making our community a nicer place to be.

So you’re facing a 💩 feedback situation. Someone called something you worked on “shit” on devel list! The horror!

Dr. Reivich identified five “thinking traps” you might find yourself falling into as a response to such a situation. Note that your thoughts in response to something can determine the outcome! Our language and thought become our reality! By understanding thinking traps we might fall into, we can be more self-aware when they happen and intervene so that we don’t fall into the trap (which in this case might involve blasting back on the mailing list and igniting a flamewar that could last for weeks… no, that would never happen…)

Right, so, here are those five thinking traps:

You’re falling into the ‘mind-reading’ thinking trap when you try to read the minds of others without actually asking them what they think. You could get all caught up into a fight or flight type of confrontation over a mere conjecture over what someone might possibly be thinking – and they weren’t even thinking that, which you’d know if you’d bothered to ask…

This trap is about placing blame on yourself entirely for the situation. It’s all your fault. You suck, and this is what you deserve. Maybe you’re an imposter. People think you know what you’re doing, but you’re just clueless, and you’ve been found out.

“Yep, it is crap. It is shit. It’s my fault, because I suck. I am not good enough, just don’t have the skills to pull this off. Not only that, I sucked my teammates down my pit of incompetence and now they’ve been embarrassed unnecessarily because of me. I’m not a real designer, clearly my taste is shitty!”

This trap is about placing blame on “them” for the situation. It’s all “their” fault. “They” sabotaged you. If it weren’t for “them,” things would have gone just fine!

“Clearly, they have no taste. Their mama didn’t raise them right, to say such a thing! They just come on the list and rant and complain, but did they actually get involved and help? Nope. This is their fault. You can’t just fly in like a seagull and crap all over our work and then fly away. You have to pitch in and help.”

This trap is about making a mountain out of a molehill, blowing the scope of the situation out of proportion ad infinitum.

“Yes, it’s crap, it’s shit. Everyone thinks so. Fedora 32 is going to go out, and everyone is going to assume it’s crap because the wallpaper is crap. Our number of users will drop. People won’t want to use it, because how could you use a Linux that has crappy wallpaper? It’ll cause such a drop in users that Red Hat will cancel Fedora. F32 could be the very last Fedora ever!”

This trap is about shutting down in response to the situation. Maybe you’ve tread this road before, and you’ve just got no more fight to give, so you give up. You might just walk away and refuse to resolve it. As a free / open source contributor, you might decide to never come back to that project, or even try to make a contribution to any project at all again. Nah, that’s never happened. 😥

“They think what I worked on is crap and shit. OK. I had fun working with the design team, and I thought what we came up with was great. I guess this just isn’t the community for me, though, when they treat each other like this. There’s nothing I can do except move on.”

The danger of these thinking traps

Your thoughts build your reality. Some potential realities born from the above thinking:

What good does this do me?

You probably are familiar with at least some of these thinking traps. Cool. But how does knowing what they are help with the whole 💩 issue?

It’s very useful to be able to identify these thinking traps as you find yourself starting to fall into them. You can catch yourself, and be a little more conscious about your thinking. If they were literal traps, being able to identify them as you start approaching them means you’ll be able to sidestep them and avoid mauling an appendage!

Sounds good. So how do you side step all this 💩?

Dr. Reivich calls the three techniques to “side step” these thinking traps “real-time resilience.” These techniques are (with applications towards the 💩 scenario:)

Examine the data you have around the situation and yourself.

Think of a more helpful way to interpret the situation.

Come up with a plan for what you’ll do or what will happen if your thinking is true.

It’s only three steps, and you don’t even have to do all of them – just one can help reset your thinking and save you from falling into a trap. You can then keep a cooler head and handle the situation more gracefully and avoid some of the unpleasant realities that could be borne from trapped thinking.

I do think this resilience framework is a useful tool for dealing with conflict in an free & open source community setting. I might even suggest that maybe training contributors in this methodology and/or socializing it within the community could help us better respond to issues as they arise.

It certainly helped me handle a 💩 party!

I haven’t finished Dr. Reivich’s course yet (I just completed the week 2 coursework today with this blog post, haha, as I trickily used a homework assignment prompt to write this all), but if more comes up that applies and I can work it into an assignment I’ll blog more on it. I definitely recommend it thus far.