As we’ve talked about here in a couple of posts now, the Fedora design team has been working on a refresh of the Fedora logo. I wanted to give an update on the progress of the project.

We have received a lot of feedback on the design from blog comments, comments on the ticket, and through social media and chat. The direction of the design has been determined by that feedback, while also keeping in mind our goal of making this project a refresh / update and not a complete redesign.

Where we left off

Here are the candidates we left off with in the last blog post on this project: 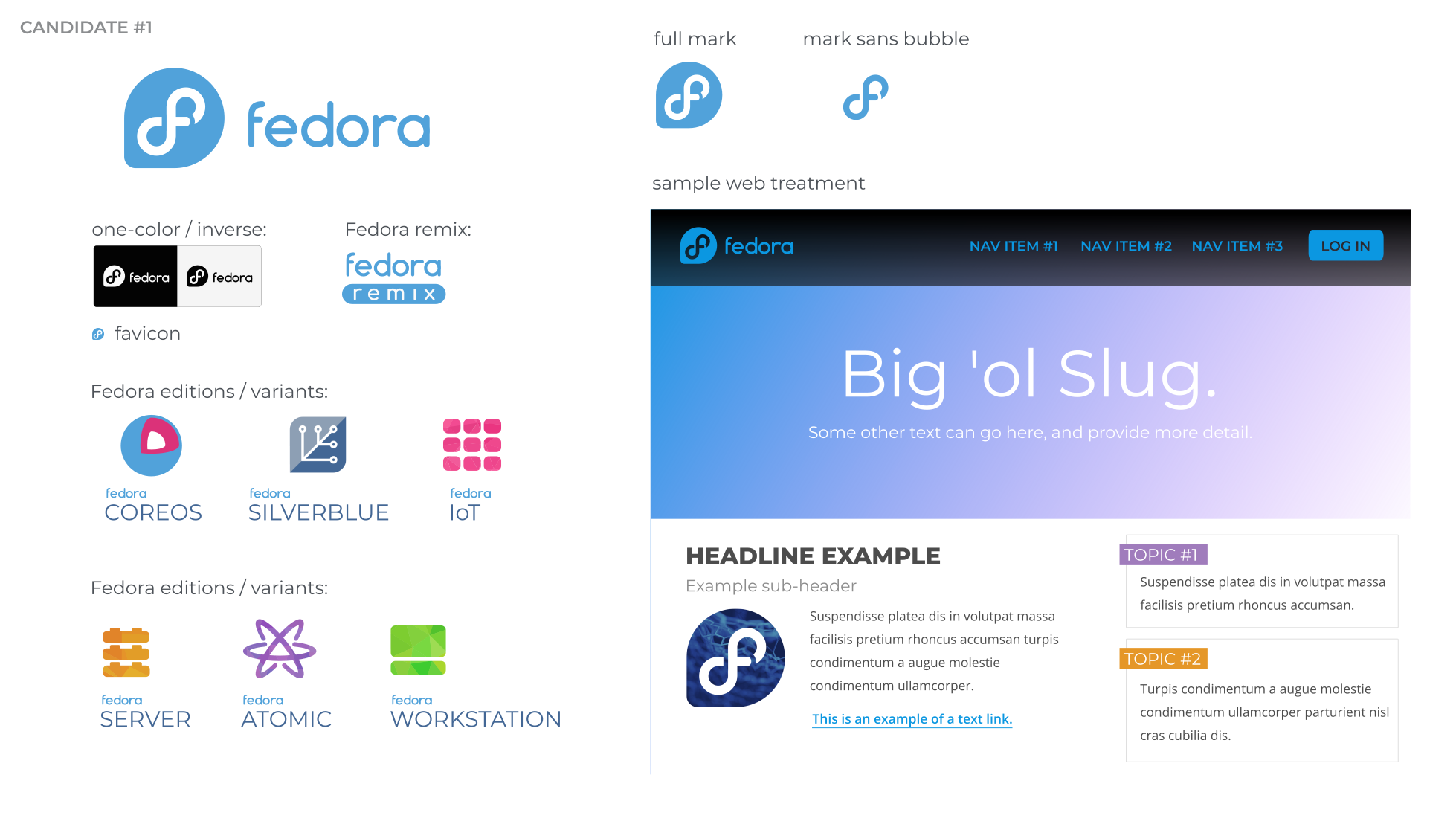 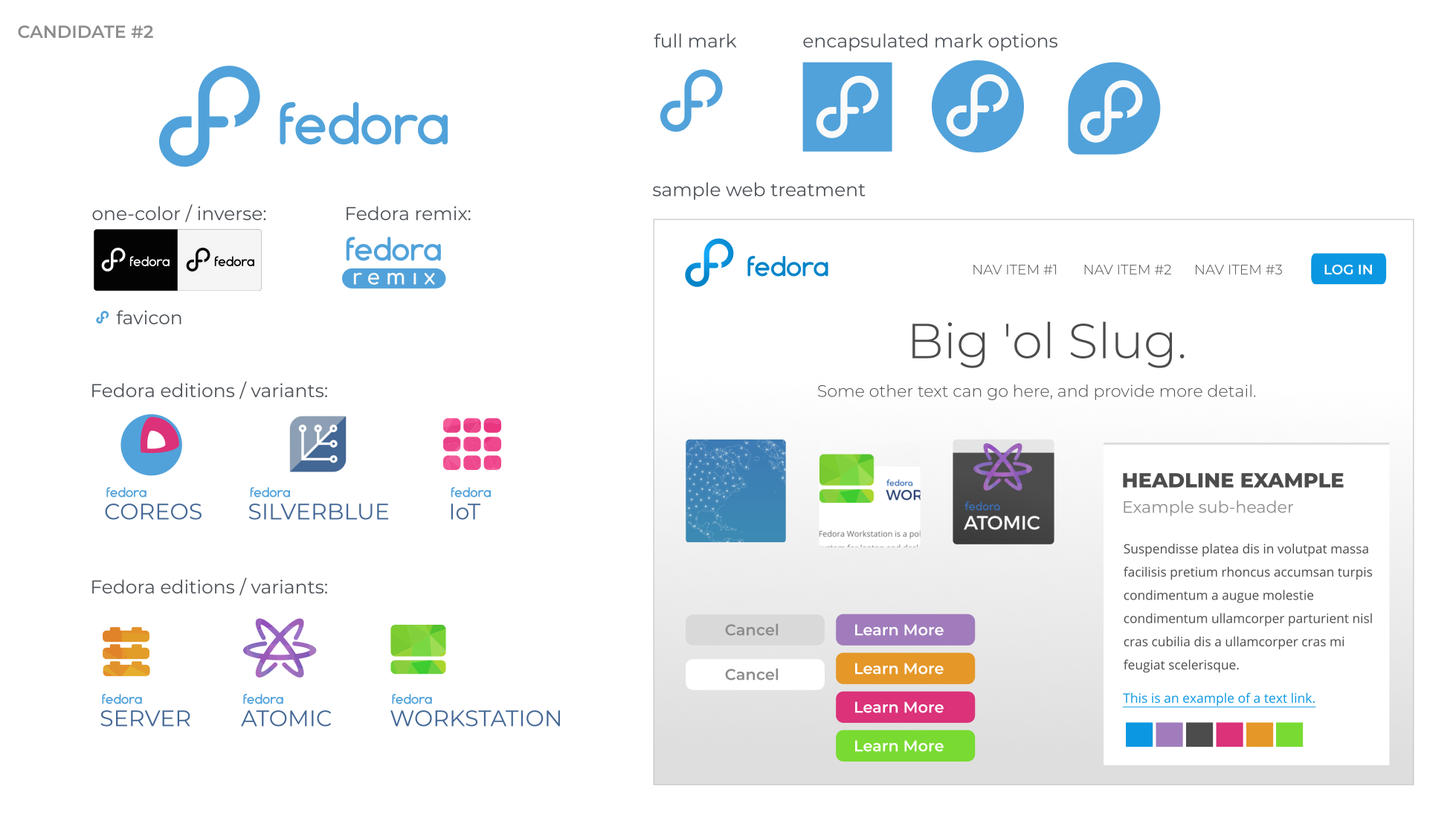 Here’s what we’ve worked on since presenting those two logo candidates, in detail.

Based on feedback, one of the first things we decided to do was to drop candidate #2 out of the running and focus on candidate #1. According to the feedback, candidate #1 is closer to the current logo. Again, a major goal was to to iterate what we had – keeping closer to our current logo seemed in keeping with that. 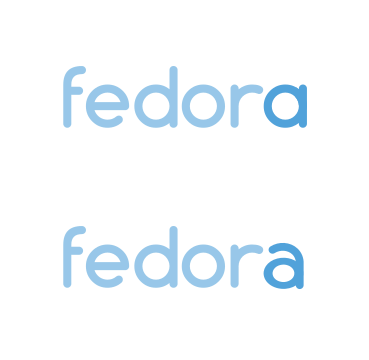 One of our redesign goals was to minimize confusion between the letter ‘a’ in the logotype and the letter ‘o.’ While the initial candidate #1 proposal included an extra mark to make the ‘a’ more clearly not an ‘o’, there was still some feedback that at small sizes it could still look ‘o’ like. The new proposed typeface for the logotype, Comfortaa, does not include an alternate ‘a’ design, so I created a new “double deckah” version of the ‘a’. Initial feedback on this ‘a’ design has been very positive.

We received feedback that the stock ‘f’ included in Comfortaa is too narrow compared to other letters in the logotype, and other feedback wondering if the top curve of the ‘f’ could better mirror the top curve of the ‘f’ in the logo mark. We did a number of experiments along these lines, even pursuing a suggested idea to create ligatures for the f:

The ligatures were a bit much, and didn’t give the right feel. Plus we really wanted to maintain the current model of having a separable logomark and logotype. Experimenting like this is good brain food though, so it wasn’t wasted effort.

Anyhow, we tried a few different ways of widening the f, also playing around with the cross mark on the character. Here’s some things we tried:

This change didn’t come about as a result of feedback, but because of a technical issue – trying to kern different versions of the ‘f’ a bit more tightly with the rest of the logo as we played with giving it more width. Spinning the ‘e’ – at an angle that mimics the diagonal and angle of the infinity logo itself – provides a bit more horizontal negative space to work with within the logo type such that the different experiments with the ‘f’ didn’t require isolating the ‘f’ from the rest of the letters in the logotype (you can see the width created via the vertical rule in the diagram below.)

Once I tried spinning it, I really rather liked the look because of its correspondence with the infinity logo diagonal. Nate Willis suggested opening it, and playing with the width of the tail at the bottom – a step shown on the bottom here. I think this helps the ‘e’ and as a result the entire logotype relate more clearly to the logomark, as the break in the e’s cross mimics the break in the mark where the bottom loop comes up to the f’s cross. 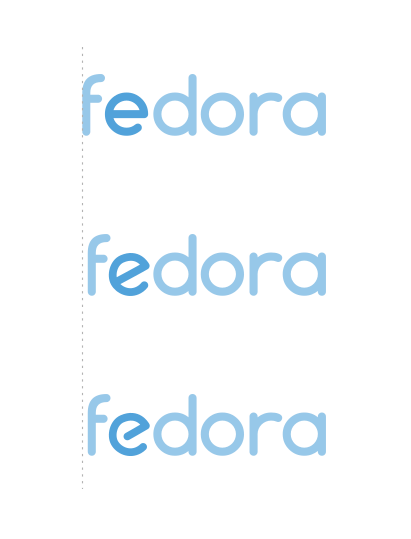 (As in all of these diagrams, the first on the top is the original logotype from the initial candidate #1 proposal.)

Putting the logotype changes together

We’ve looked at each tweak of the logotype in isolation. Here is how it looks all together – starting from the original logotype from the initial candidate #1 proposal to where we’ve arrived today:

There has been a lot of work on the mark, although it may not seem like it based on the visuals! There were a few issues with the mark, some that came up in the feedback:

Here’s just a few snapshots of some of the variants we tried for the mark to try to play with addressing some of this feedback:

I am actually not sure which version of the mark to move forward with, but I suspect it will be from the #3-#4-#5 set.

Where we are now

So here’s a new set of candidates to consider, based on all of that work outlined above. All constructive, respectful feedback is encouraged and we are very much grateful for it. Let us know your thoughts in the blog comments below. And if you’d like to do a little bit of mix and matching to see how another combination would work, I’m happy to oblige as time allows (as you probably saw in the comments on the last blog post as well as on social media.)

Some feedback tips from the last post that still apply:

The most useful feedback is stated as a problem, not a solution. E.g., if you suggest changing an element, to understand your perspective it’s helpful to know why you seek to change that element. Also note that while “I don’t like X” or “I like Y” is a perfectly valid reaction, it’s not particularly helpful unless you can dig in a little deeper and share with us why you feel that way, what specific technical details of the logo (shape, contrast, color, clarity, connotation, meaning, similarity to something else, etc.) you think triggered the feeling.

Please also note this is not a vote. We would love your feedback in order to iterate and push the designs forward. If this was a vote or poll, we’d set one up using the proper software. We want feedback on why you like, don’t like, or otherwise react to what you see here. We are not going to tally “votes” here and make a decision based on that. Here is an example of a very productive and helpful set of feedback that resulted in a healthy back and forth with a new direction for the designs. Providing feedback on specific components of the logo is great brain food for making it better!

Update: I have disabled comments. I’ve just about reached my limit of incoming thoughtlessness and cruelty. If you have productive and respectful feedback to share, I am very interested in hearing it still. I don’t think I’m too hard to get in touch with, so please do!