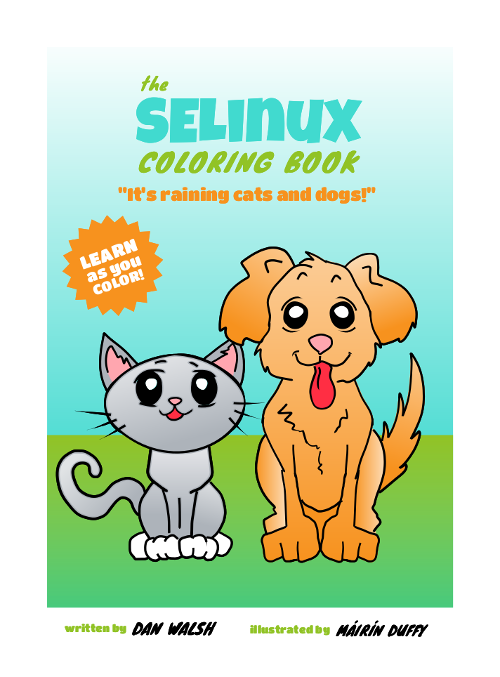 Dan Walsh had a great idea for explaining SELinux policy concepts in a fun way – creating an SELinux coloring book! He wrote up a script, I illustrated it using my Wacom in Inkscape on Fedora, and we turned it into an opensource.com article. Still. We needed physical coloring books, and what better place to hand them out than at the Red Hat Summit?
We got them printed up and shipped off to the Summit (some in assorted volunteers’ baggage 🙂 ), and they’ve been so popular that Dan is getting close to running out, except a reserve he’s kept for the SELinux for Mere Mortals talk later today. We also handed out some slightly imperfect misprints in the Westford Red Hat office, and we’ve been told a co-worker’s daughter brought hers to pre-school and it was a big hit – the other kids want their own. When it comes to SELinux, we’re starting ’em young on the setenforce 1 path. 🙂
How might you get your own copy? Well, we’ve made the coloring book, including the text and artwork, available under a Creative Commons Attribution ShareAlike license. So download, print, share, remix, and enjoy! 🙂

SELinux Coloring Book by Dan Walsh & Máirín Duffy is licensed under a Creative Commons Attribution-ShareAlike 4.0 International License.
Based on a work at http://opensource.com/business/13/11/selinux-policy-guide.