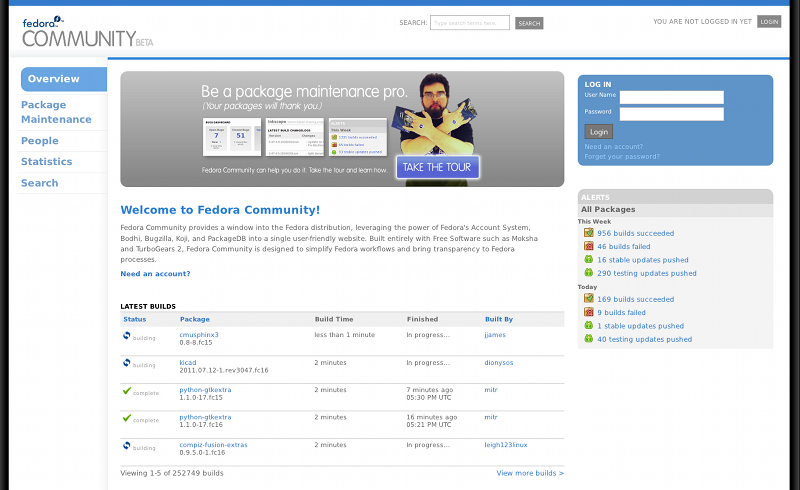 The story up ’till recently

So you may have heard about Fedora Community, a web application we developed and launched in 2009. Or, maybe not. From the wiki planning page for the project:

Fedora Community is a web portal designed to make it easier for package maintainers to do their job. The goal is to create a modular web page in which each module would pull views from the various Fedora resources and display them to the user.

Well, the project wasn’t the resounding success Spot, J5, Luke, and I were hoping it might be. We’d set out to make life easier for Fedora package maintainers, which of course benefits everyone who uses Fedora. We did run a usability test of Fedora Community at FUDcon Toronto in December 2009 after it had been available for a couple months. There’s some detailed testing analysis here, but in short we identified the following issues during testing:

Because of various commitments / new projects on each of our plates, however, after the usability test the site pretty much remained the same for a while. We never did a huge marketing push for it, and around the same timeframe we launched fedoracommunity.org which kind of confused matters: it is a completely different site with the same name! (It’s a portal for world-wide, region-specific Fedora websites and teams.)

As you may already be aware, the Fedora infrastructure team has been evaluating the services they provide and shutting down services that aren’t in active use that expend resources that could be better used for Fedora in other ways. For example, recently the Fedora WordPress MU server was shut down for a number of good reasons. (Please check out the full rationale for more backstory.)
In this spirit, Smooge started a thread about Fedora Community and what future plans for it are on the Fedora infrastructure mailing list a couple of week ago. Here’s a summary of the points that came up in the thread:

So last week the Fedora Community team (Spot, J5, Luke, me) got together to figure out what we should do. We grabbed a couple of whiteboards and discussed a bit about Fedora Community’s fate!

In short, we basically started talking through the issues we’d need to fix to make the application more awesome, which involved some great expansion ideas, but then receded back to ‘let’s fix the core first,’ which then ended in ‘let’s get a new, clean, minimal front-end going, really get it right, and expand carefully from there.’ Okay, so, let me see if I can walk you through how the discussion went so you can understand this train of thought: 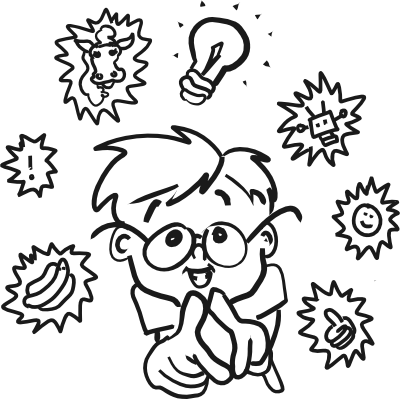 I think we started out talking about cool new features we could add on to it. Luke’s initial post to the Fedora infrastructure list thread covers a lot of these ideas, as does his summary of the ‘Next Big Fedora Engineering Project’ session at FUDcon Tempe earlier this year. Here’s an at least partial summary in case you’re lazy like me and don’t click on all the links:

(Want more details? Check this link and this link for them!)

Ideas are great, but… 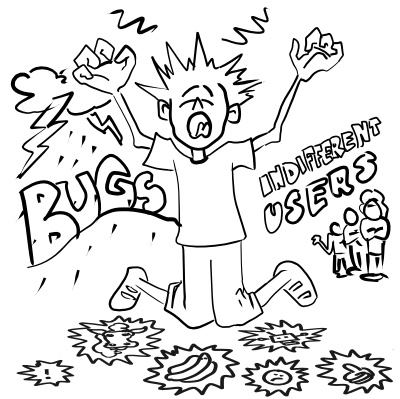 I think we talked about some of these awesome ideas, but then came to the realization that our scope was too big, and while all of the ideas rocked, it might take us a really long time and a lot of effort to do them right, and we should probably focus on fixing what we’ve got before adding more stuff.

Okay, what should we fix in what we’ve already got?

So we then started coming up with a list of the issues in the current site that we wanted to address, and went into some detail about how we might fix them: