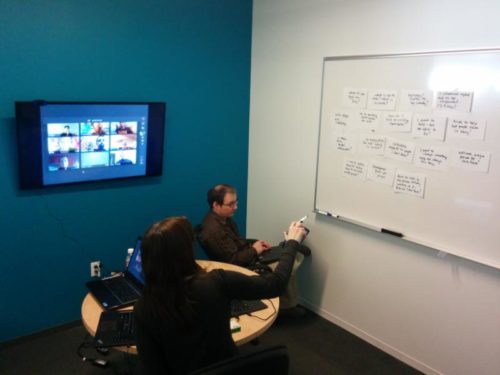 So today we had a pretty successful brainstorm about enabling new contributors in Fedora! Thank you to everyone who responded my call for volunteers yesterday – we were at max capacity within an hour or two of the post! 🙂 It just goes to show this is a topic a lot of folks are passionate about!
Here is a quick run-down of how it went down:

We tried to use OpenTokRTC but had some technical issues (we were hitting an upper limit and people were getting booted, and some folks could see/hear some but not others. So we moved onto the backup plan – BlueJeans – and that worked decently.

Watch this part of the session starting here!
For about the first 30 minutes, we brainstormed using a technique called Understanding Chain to roleplay as if we were new contributors trying to get started in Fedora and noting all of the issues we would run into. We started thinking about how would we even begin to contribute, and then we started thinking about what barriers we might run up against as we continued on. Each idea / thought / concept got its own “sticky note” (thanks to Ryan Lerch for grabbing some paper and making some large scale stickies,) I would write the note out, Ryan would tack it up, and Stephen would transcribe it into the meeting piratepad. 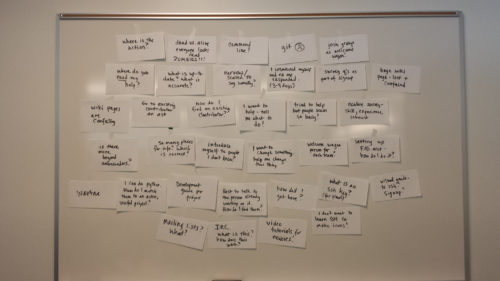 Watch this part of the session starting here!
Next, I walked everyone through the design hubs concept and full set of mockups. You can read up more on the idea at the original blog post explaining the idea from last year. (Or poke through the mockups on your own.) 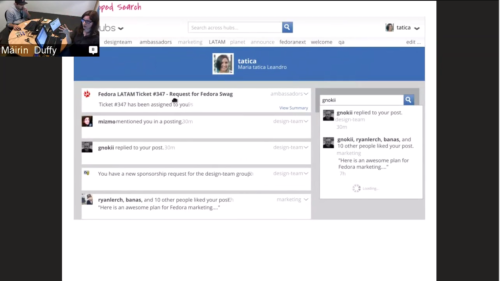 Watch this part of the session starting here!
We spent the remainder of our time wakling through the list of newbie issues we’d generated during the first exercise and comparing them to the Fedora Hubs concept. For each issue, we asked these sorts of questions:

We came up with so many awesome ideas during this part of the discussion. We had ideas inline with the issues that we’d come up with during the first exercise, and we also had random ideas come up that we put in their own little section on the piratepad (the “Idea Parking Lot.”)
Here’s a little sampling of ideas we had:

There’s a lot more – you can read through the full piratepad log to see everything we came up with. 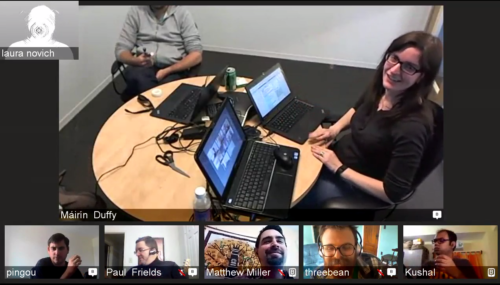 Watch this part of the session starting here!
Here’s the next steps we talked about at the end of the meeting. If you have ideas for others or would like to claim some of these items to work on, please let me know in the comments!

How to Get Involved / Resources

So we have a few todos listed above that could use a volunteer or that I could use help with. Here’s the places to hang out / the things to read to learn more about this project and to get involved:

Please let us know what you think in the comments! 🙂