This past weekend, the Fedora Design Team held an Inkscape and Fedora Badges workshop at Red Hat’s office in Westford, Massachusetts. (You can see our public announcement here.) 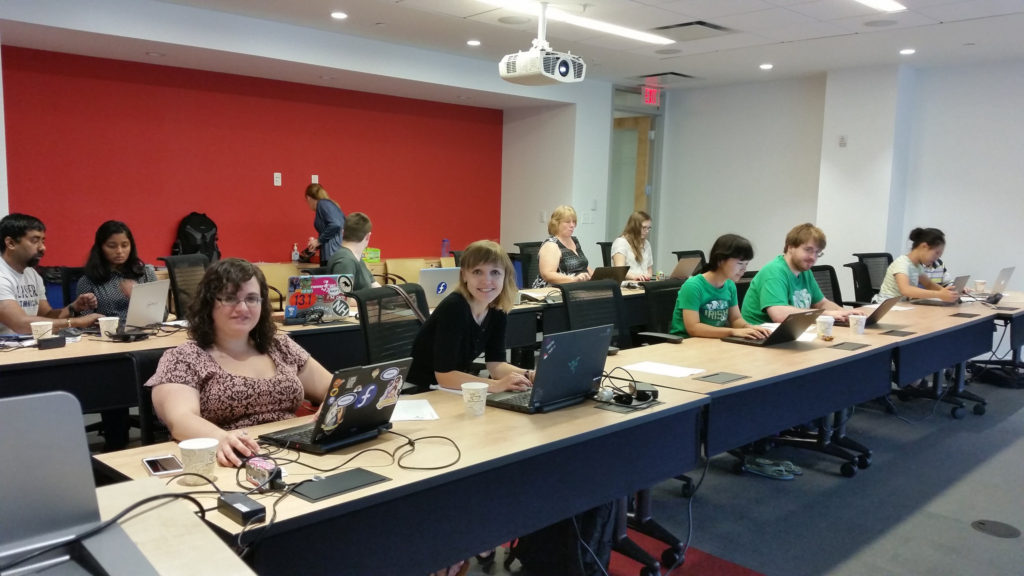 Why did the Fedora Design Team hold this event?

At our January 2015 FAD, one of the major themes of things we wanted to do as a team was outreach, to both help teach Fedora and the FLOSS creative tools set as a platform for would-be future designers, as well as to bring more designers into our team. We planned to do a badges workshop at some future point to try to achieve that goal, and this workshop (which was part of a longer Design FAD event I’ll detail in another post) was it. We collectively feel that designing artwork for badges is a great “gateway contribution” for Fedora contributors because:

This is the first event of this kind the Fedora Design team has held, and perhaps any Fedora group? We aimed for a general, local community audience rather than attaching this event to a larger technology-focused conference event or release party. We explicitly wanted to bring folks not currently affiliated with Fedora or even the open source community into our world with this event.

Preparing for the event 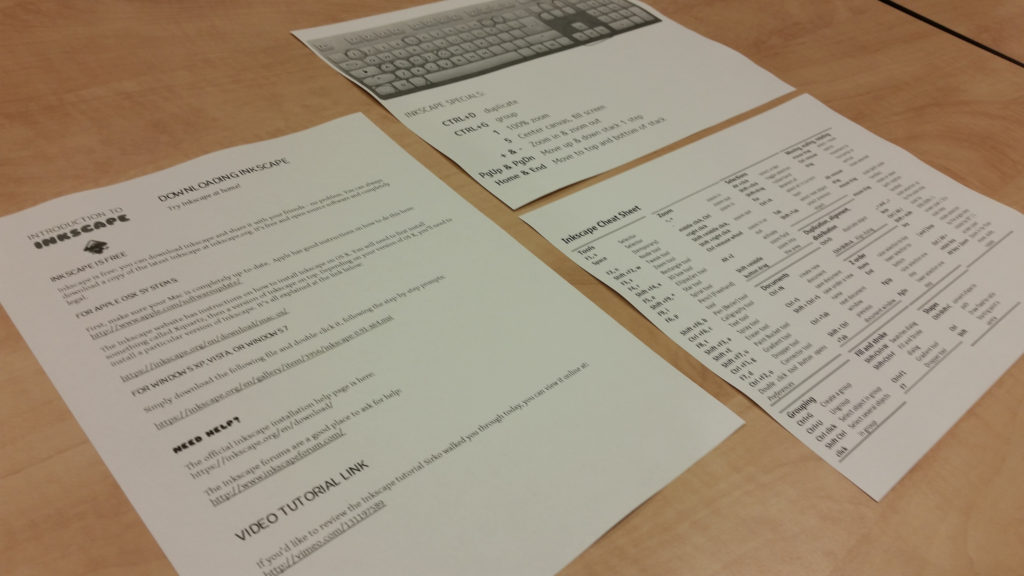 There was a lot we had to do in order to prepare for this event. Here’s a rough breakdown:

Marketing (AKA getting people to show up!)

We wanted to outreach to folks in the general area of Red Hat’s Westford Office. Originally, we had wanted to have the event located closer to Boston and partner with a university, but for various reasons we needed to have this event in the summer – a poor time for recruiting university students. Red Hat Westford graciously offered us space for free, but without something like a university community, we weren’t sure how to go about advertising the event to get people to sign up.
Here’s what we ended up doing: 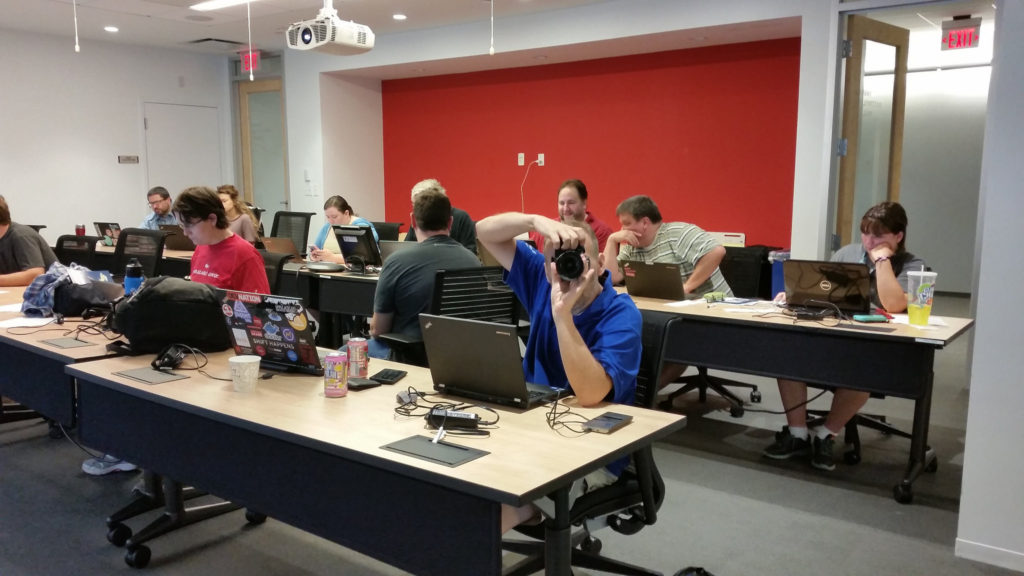 We had to formally reserve the space, and also figure out how many people were coming so we knew how much and what kinds of food to order – among many other little logistical things. Here’s how we tackled that: 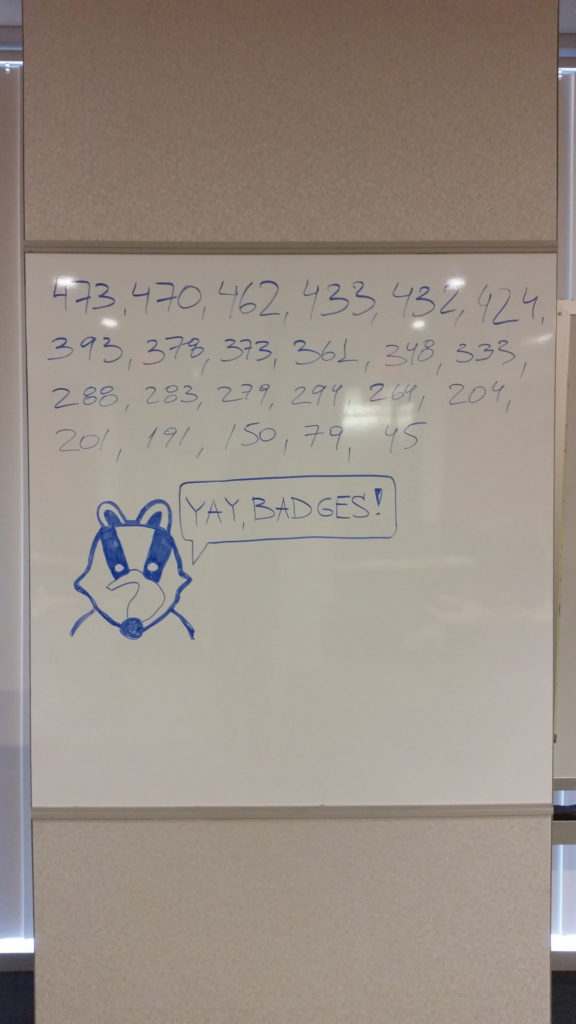 We also needed to prepare for the sessions themselves, of course: 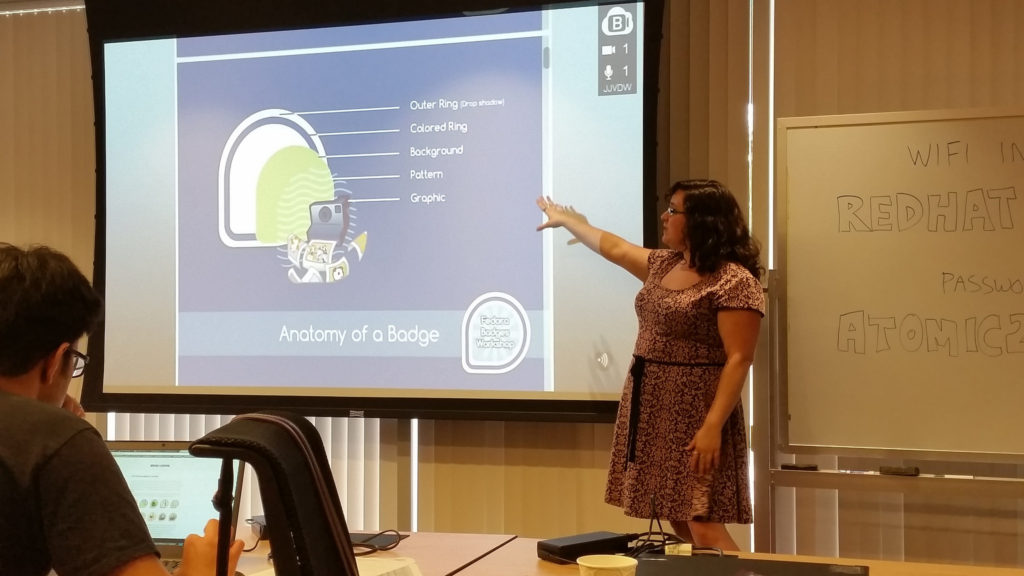 Here’s a rough outline of our agenda, with planned and actual times:

Here’s the materials we used:

As mentioned elsewhere in this post, we did record the sessions, but I’ve got to go through the recordings to see how usable they are and edit them down if they are. I’ll do another post if that’s the case with links to the videos.

How did the event go?

Unfortunately, despite our best efforts (and a massive amount of prep work,) I don’t think any of us would qualify the event as a home run. We ran into a number of challenges, some of our own (um, mine, actually!) making, some out of our control. That being said, thus far our survey results have been very positive – basically attendees agreed with our self-analysis and felt it was a good-to-very good, useful event that could have been even better with a few tweaks. 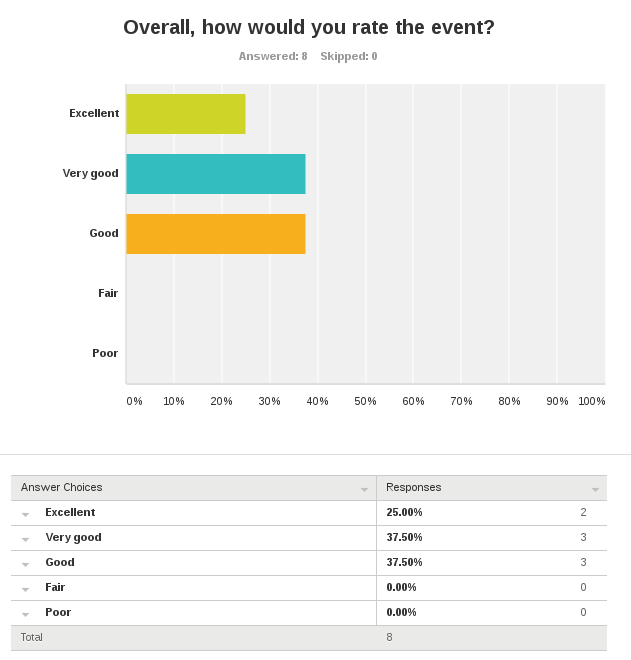 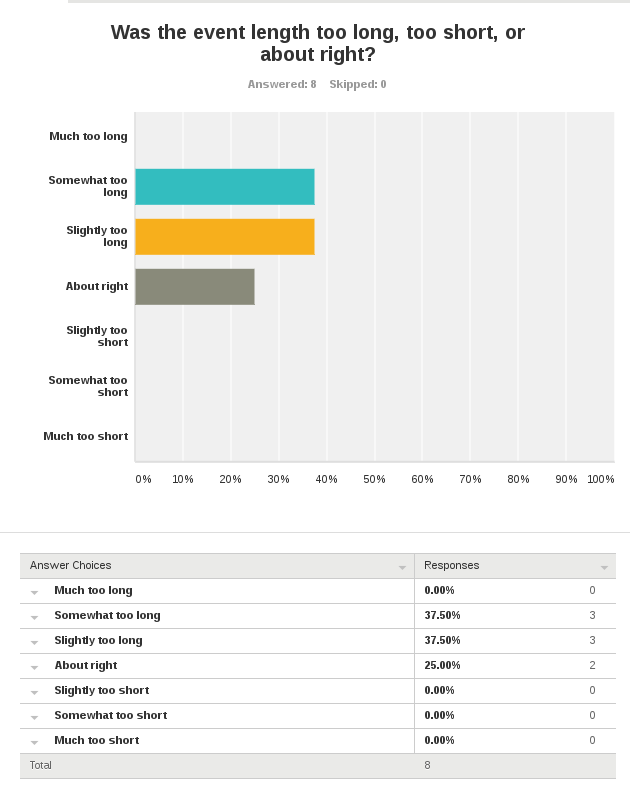 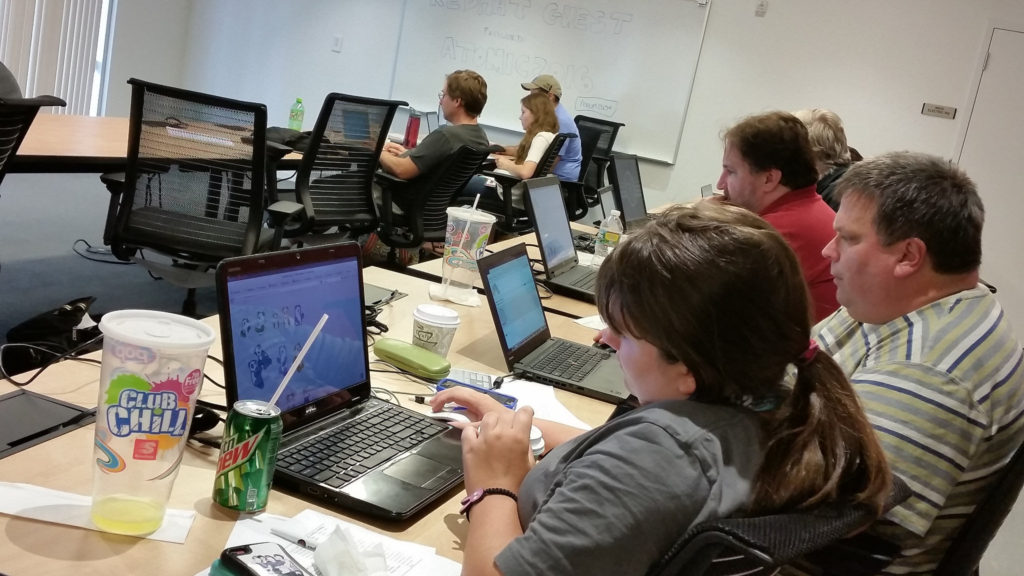 Thus far we’ve had 8 respondents out of the 30 attendees, which is actually not an awful response rate. Here’s a quick rundown of the results: 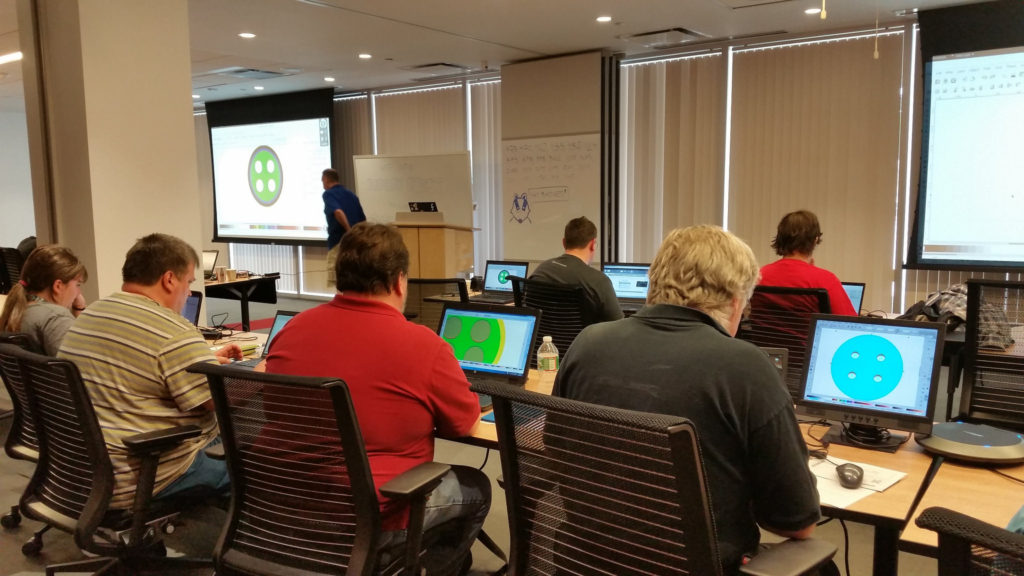 Despite some of the hiccups, it is clear attendees got a lot out of the event and enjoyed it. There are a lot of recommendations / suggestions documented in this post for improving the next event, should one of us decide to run another one.
In general, in our post-event discussion we agreed that future events should have a tighter experience level pre-requisite; for example, absolute beginners tended to like the Inkscape bootcamp material, so maybe have a separate Inkscape bootcamp event for them. The more experienced users enjoyed gnokii’s project-style, fast-paced tutorial and the badges workshop, so having an event that included just that material and had a pre-requisite (perhaps you must be able to install Inkscape on your own and be at least a little comfortable using it) would probably work well.
Setting a time limit of 3-4 hours and sticking to it, with check-ins, would be ideal. I think an event like this with this many attendees needs 2-3 people minimum running it to work smoothly. If there were 2-3 Fedorans co-located and comfortable with the material, it could be run fairly cheaply; if the facility is free, you could do it for around $200 if you provide food.
Anyway I hope this event summary is useful, and helps folks run events like this in the future! A big thanks to the Fedora Council for funding the Fedora Design Team FAD and this event!