Computers should change peoples’ lives for the better and software freedom is an essential component in doing that. Making Fedora easier to use, I believe, will help because I think Fedora’s values lead to the right approach in meeting our essential need for software freedom.
Fedora doesn’t follow a model of:

I don’t think the ultimate goal of Fedora is world domination, either. I think it’s world collaboration. 🙂 The end game isn’t to get as many users as possible; it’s to get as many productive contributors as possible to all free software and free culture. This is pretty well reflected in Fedora’s vision statement:

The Fedora Project creates a world where

So this is a picture that I think represents what you work on if you work on Fedora. If you consider yourself a Fedora contributor, you’re involved in enabling other folks to succeed in least one of these areas (My apologies for components which may be represented out-of-scale):

(Inkscape SVGZ source)
The widest chunks are using Fedora and contributing.
Use Fedora is wide because we need to build, maintain, and improve on Fedora the OS itself to deliver free software; this is the day-to-day work of upstream and downstream developers, QA, and packagers. It’s also the day-to-day work of folks who support those who use Fedora; release engineering and infrastructure in delivering updates, the documentation team and folks in the forums and IRC who help users.
Contribute is wide because we need to support the folks who develop, build, test, design, market, and spread Fedora the OS – they need infrastructure to realize their goals, they need communication channels, they need tools, they need motivation and support.
Now, you could immerse yourself in the cycles of using and contributing. You could. Honestly, many folks do this day-to-day and leave the other pieces to other teams (marketing, websites, ambassadors, events, etc.) That’s fine; it’s a large complex system and you can’t worry about all pieces at all times. I do not think you can just drop the outreach portions of this system, though – leaving it to chance and not thinking at least a little about a strategy for which users you want to recruit and why. I worry a lot about this. Without exposure to ideas from fresh faces, without sanity-checks, and without new recruits to replace the turnover, I think you either shrink over time or stagnate. Either in our case would negatively impact our ability to recruit more contributors, our ultimate goal: (Inkscape SVGZ source)
This idea has been illustrated and discussed previously, in slightly different forms in the Fedora community before. Basically, we should actively and strategically recruit new folks into our community to grow our userbase and thus our potential contributor base.

The Fedora Project Board has over the past few years done a lot of work to define Fedora’s strategy, including its user base and basic goals:

Fancy-pants documents! You might think we then all set them upon the fireside trophy shelf^W^W^W wiki, revel in a job well done and how fancy our pants are, and move on with our lives. Actually, these are documents that we can use to make decisions about how to keep our community sustainable, and how we should pave the way for new users and contributors to get involved in the project. What – how? Here’s a few examples, one hasn’t happened yet, one has, one is in progress and is the topic for the rest of this post:

(Inkscape SVGZ source)
If you want people to try Fedora so they can use it and so they can eventually become a FLOSS contributor, they need to be able to find and download it in the first place. The Fedora websites team and design team, with the website redesign project, hopefully made it easier for our user base to find the right download and to obtain it via our website.
Helping our user base access the installation media isn’t enough, though. They have to be able to make it through the installer to the other side! Those gaps in the diagram – each of those is a bail-out point. If they can’t make it easily through the installer, a member of our user base may well give up on Fedora.
So there is a very long justification for examining Fedora’s installer, but hopefully the backstory and context here gives you a better understanding of the approach to the design process that follows.

The Anaconda UX redesign – some history

So Fedora’s installer, Anaconda, is something we talked about a complete UX redesign for this past January at FUDcon Tempe. While we ended up getting a little stuck on the spins aspect towards the end, Will Woods brought up an idea during our brainstorm that led us to this: 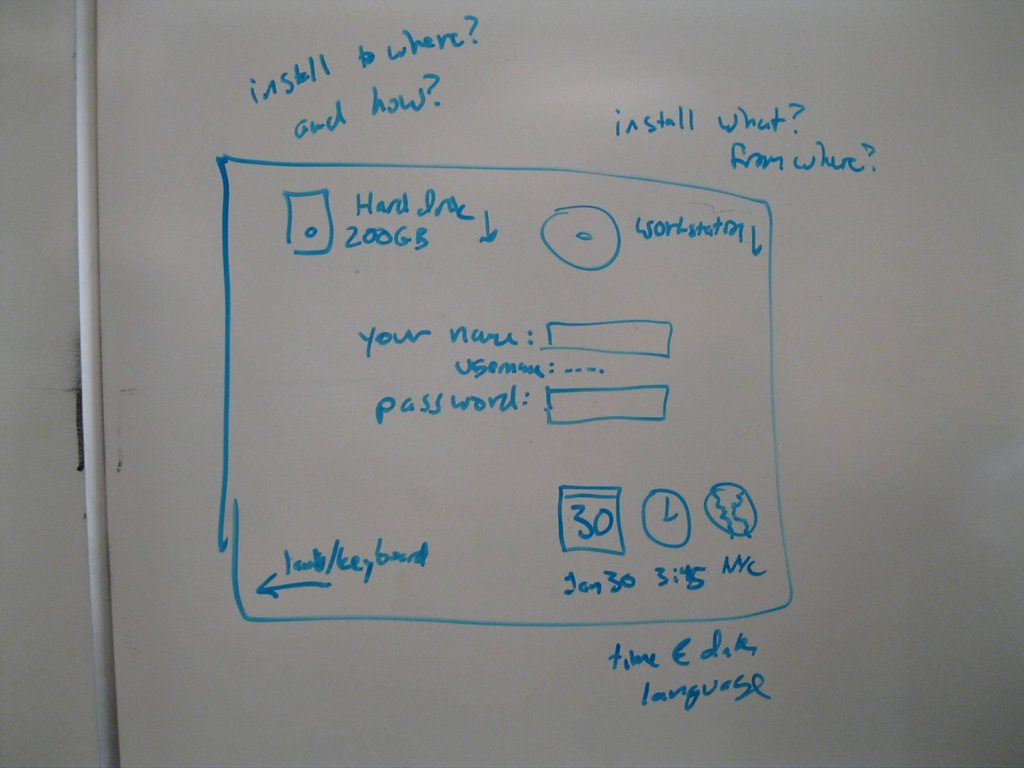 I think is pretty brilliant of him to have led us this way, which is essentially a hub & spoke model for the UI. (Since I’m telling this tale in chronological order, you’ll have to wait for more details on this brilliance later.)
After FUDcon Tempe, I thought it would be a good idea to both understand where the installer is at today, and explore a bit about where we might want it to go.

Where the installer is at today The installer today is a linear, wizard-style interface with many screens (depending on the path you choose, and if you count the firstboot and TUI screens you might encounter ~30 screens). Once you accept the partitioning scheme, you’ve gone beyond the point of no return and you can’t go back in the installer. So there isn’t a way to get an overview of all of your choices before pulling the trigger. Below is an (quite aged at this point) diagram of the installer flow sans firstboot from Fedora 11 so you can get the gist:

To understand where it was at (which was at the time, pre-F15), we did a couple of things: So leading up to and since FUDcon Tempe, a bunch of exploratory kind of design work and thinking has been going on, but we didn’t really reach a full coordinated design effort yet.

Kicking off a coordinated design effort

So the installer UX redesign is currently planned for Fedora 17. Fedora 15’s out – time to get cranking. Maybe 2-3 weeks ago, Chris Lumens told me we should ramp things up again, so I’ve been working with the design team (including a couple of new UX recruits!) on an overall plan of attack with some execution thus far.

So our current thinking, right now (which generally occurs both in the #anaconda IRC channel as well as the on the anaconda-devel mailing list) is that we would use a two-hub hub & spoke model for Anaconda’s UI: What is pretty cool about this model is that if we’re able to pick the settings for hub #1 right (and yet again, not sure if that’s possible without breaking storage out into another screen), you could skip all of the options in the hub, click continue, and get a sane install. It essentially lets you skip multiple screens in one click. It also serves as a review or inventory of everything you’ve chosen, making it easy to skim over everything and dive down and modify something before pressing go. To change something you already selected in the current linear installer interface, you have to go “back… back… back…. back….” and sometimes you hit a, “back… back… oh crap, I can’t go back past this point” type of situation. We also have a tension in designing for Anaconda that it does not only serve as the installer for Fedora, it serves as the installer for other distros with different user bases such as CentOS, Red Hat Enterprise Linux, and Scientific Linux. Users of those distros are more likely to care, for example, about specialized storage devices that most Fedora users probably don’t even have access to or care about using in an install. The hub and spoke model is a compelling approach here I think because we can serve Fedora’s users who might not care to tweak EVERY knob available by providing clear overviews with the option to dive in a level deep where they have interests. For users who must access very particular granular knobs to achieve their goals, though, they still have access through progressively deeper dives down a particular spoke.
Well, that’s all of our latest thinking. It could change. It’s a design. 🙂 If we discover through some user research, for example, that some idea here is problematic, or if we run into a technical snag, the gist of our design described thus far may change. That’s okay. We want our installer to rock!

I´m serving as the lead designer of the project, with some help from other Fedora design team members:

This is a huge project and I think a lot of issues and edge cases will come up as we least expect it. The approach I’ve proposed to the team is:

Following the brainstorming and the overall process

So the action is taking place here on a number of fronts.

Okay, okay. Wow, that was long. But it sounds cool. How can I help?

If this sounds like an interesting project and you’d like to get involved but aren’t sure how, here are some ideas. These are all things that would be very helpful for us that are probably a good way to get started in on the project: