Fedora 28 (F28) is slated to release in May 2018. On the Fedora Design Team, we’ve been thinking about the default background wallpaper for F28 since November. Let’s walk through the Fedora 28 background process thus far as a sort of pre-mortem; we’d love your feedback on where we’ve ended up.

As of the past 3 releases, we choose a sequential letter of the alphabet and come up with a list of scientists / mathematicians / technologists to serve as an inspiration for the desktop background’s visual concept:

We had a meeting in IRC (which I seem to have forgotten to run meetbot on 🙁 ) where we brainstormed different ways to riff off of Emily Duncan’s work as an inspiration. One of the early things we looked at were some of the illustrations from one of Duncan’s patents: 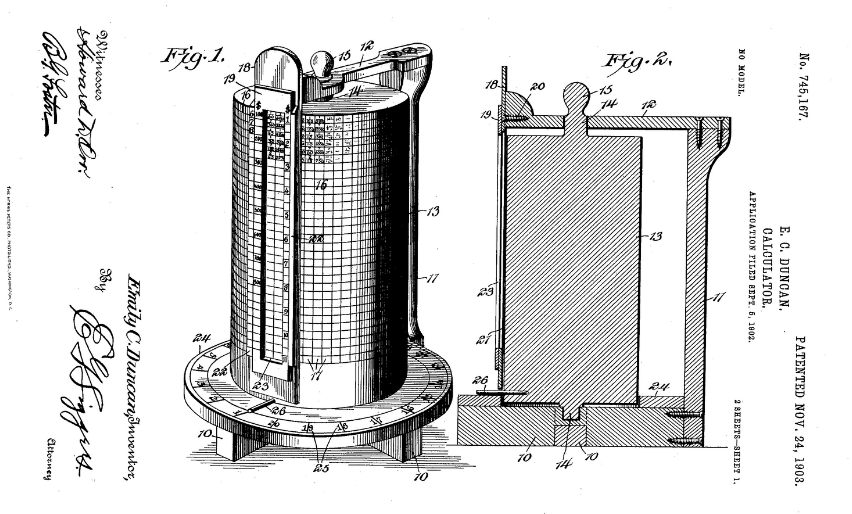 Gnokii started drafting some conceptual mockups, starting with a rough visualization of an Enigma machine and moving to visuals of electric wires and gears:

During a regular triage meeting, the team met in IRC and we discussed the mockups and had some critique and suggestions which we shared in the ticket.

After the holidays, we got back to it with the beta freeze deadline in mind. Note, we don’t have alpha releases in Fedora anymore, which means we need to have more polish in our initial wallpaper than we had traditionally in order to get useful feedback for the final wallpaper. This started with a regular triage meeting where the F28 wallpaper ticket came up. We brainstormed a lot of ideas and went through a lot of different and of-the-moment visual styles. Maria shared a link to a Behance article on 2018 design trends and it seemed 3D styles in a lot of different ways are the trend of the moment. Some works that particularly inspired us:

Both myself and terezahl, taking these inspirations as directions, started on another round of mockups.
Terezahl created mockups, one which appears to be inspired by Pilkington’s work, based of the concept of 28’s being a triangular number:

I was inspired by Weinkle’s paint waves, but couldn’t figure out a technique to approximate it in Blender. Conceptually, I wanted to take gnokii’s wires with data ‘lights’ travelling down the wires, and have those lights travel down the ridges in an abstract swirled wave. I figured probably it would take some work with Blender’s particular system, since the mass of a character’s hair is typically created that way. I had never used Blender’s particle system before, so I took a tutorial that seemed the closest to the effect I wanted – a Blender Guru tutorial by Andrew Price:

As per the feedback I received from gnokii – the end result was too close to the output you’d expect from such a tutorial. I wasn’t able to achieve a more solid mass than the fiber optic strands, although they visually represented the ‘data light’ concept fork I was going for:

Time was short, so we ended up deciding to ship this mockup – as close to the tutorial as it was – in the F28 beta to see what kind of feedback we got on the look. Thankfully Luya was able to package it up for us with some time to spare! So far, the preliminary feedback we’ve gotten from folks on social media and/or who’ve seen it via Luya’s package for beta has been positive.

Since the time-consuming work of building the platform in Blender from the tutorial is done, I’ve started playing around with the idea to see what kind of visuals we could get. The obvious, of course, is to work the Fedora logo into it. Fedora 26’s wallpaper had a sound wave depicting the vocalization of the word “Fedora” – I was trying to think of how to have the fiber optic ‘data’ show the same. Perhaps this is too literal. Anyhow, here are the two crowd favorites thus far:

Anyway, this is where you come in. Take a look at these. With the system built in Blender, we have a lot of things we can tweak easily – the angles, the lens / bokeh / focus, the shape / path of the strands (like how the latest renderings follow the Fedora f/infinity), the shape / type of object the strands are made of (right now long / narrow cylinders.) These kinds of tweaks are quick. Any ideas you have on a path forward here, or just simple feedback, would be much appreciated. 🙂