The dream is real – we are cranking away, actively building this very cool, open source, socially-oriented collaboration platform for Fedora.
Myself and Meghan Richardson, the Fedora Engineering Team’s UX intern for this summer, have been cranking out UI mockups over the past month or so (Meghan way more than me at this point. 🙂 ) 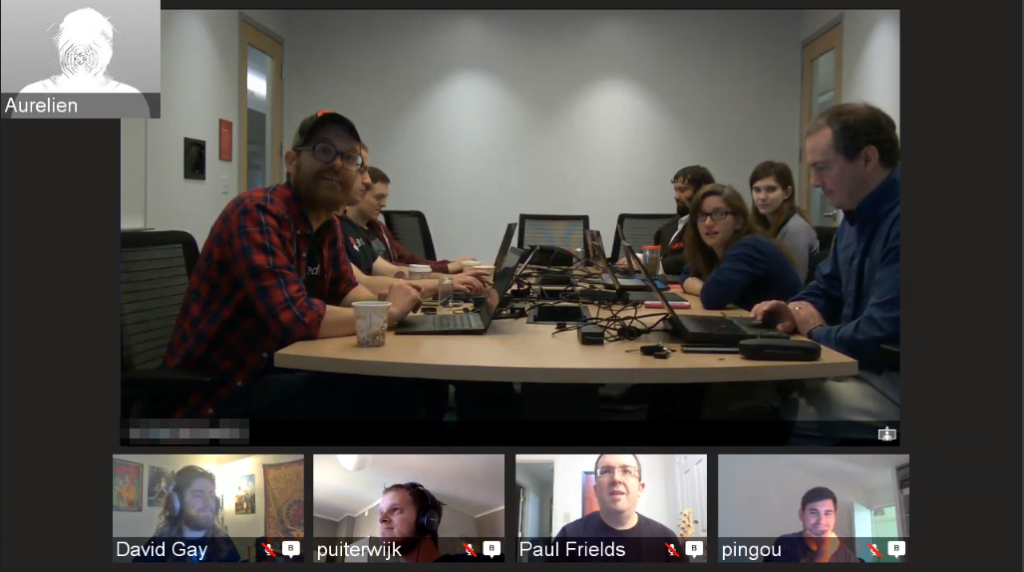 We also had another brainstorming session. We ran the Fedora Hubs Hackfest, a prequel to the Fedora Release Engineering FAD a couple of weeks ago.
After a lot of issues with the video, full video of the hackfest is now finally available (the reason for the delay in my posting this 🙂 ).

Let’s talk about what went down during this hackfest and where we are today with Fedora Hubs:

What is Fedora Hubs, Exactly?

(Skip directly to this part of the video)
We talked about two elevator pitches for explaining it:

Who are we building it for?

The main philosophy here is to provide a compelling user experience for new users that can potentially enhance the experience for existing contributors but at the very least will never disrupt the current workflow of those existing contributors. Let’s look at this through the example of IRC, which Meghan has mocked up in the form of a web client built into Fedora Hubs aimed at new contributor use:
If you’re an experienced contributor, you’ve probably got an IRC client, and you’re probalby used to using IRC and wouldn’t want to use a web client. IRC, though, is a barrier to new contributors. It’s more technical than the types of chat systems they’re accustomed to. It becomes another hurdle on top of 20 or so other hurdles they have to clear in the process of joining as a contributor – completely unrelated to the actual work they want to do (whatever it is – design, marketing, docs, ambassadors, etc.)
New contributors should be able to interact with the hubs IRC client without having to install anything else or really learn a whole lot about IRC. Existing contributors can opt into using it if they want, or they can simply disable the functionality in the hubs web interface and continue using their IRC clients as they have been.

(Skip directly to this part of the video)
Next, Paul suggested we go around the room and introduce ourselves for anybody interested in the project (and watching the video.)

(Skip directly to this part of the video)
We played a game called ‘Pain Gain’ to explore both of the types of users we are targeting: new contributors and experienced Fedora contributors. We started talking about Experienced Contributors. I opened up a shared Inkscape window and made two columns: “pain” and “gain:”

Then we rinsed and repeated for new contributors: 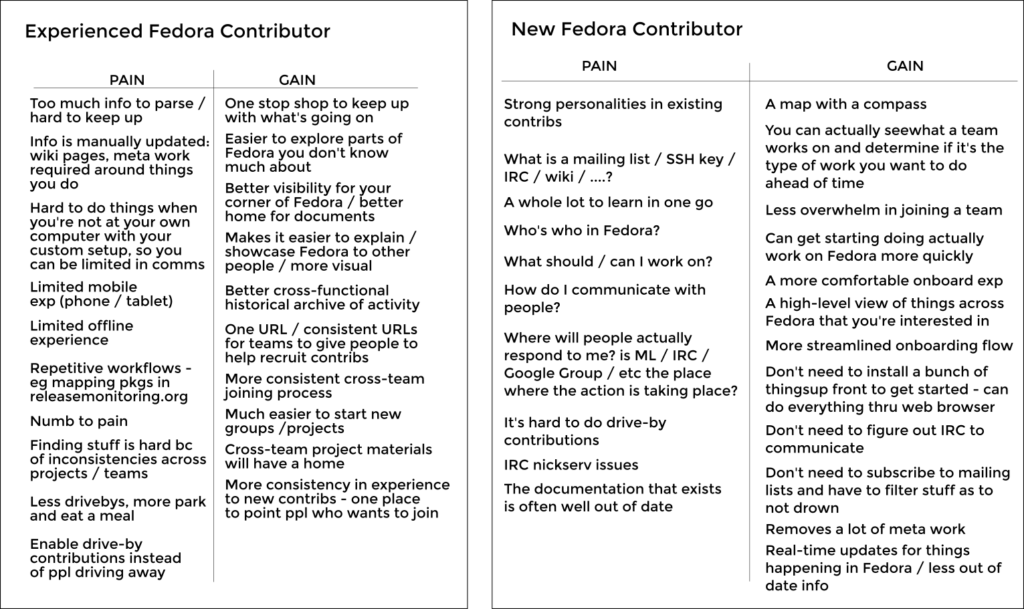 While we discussed the pains/gains, we also came up with a lot of sidebar ideas that we documented in an “Idea Bucket” area in the file: 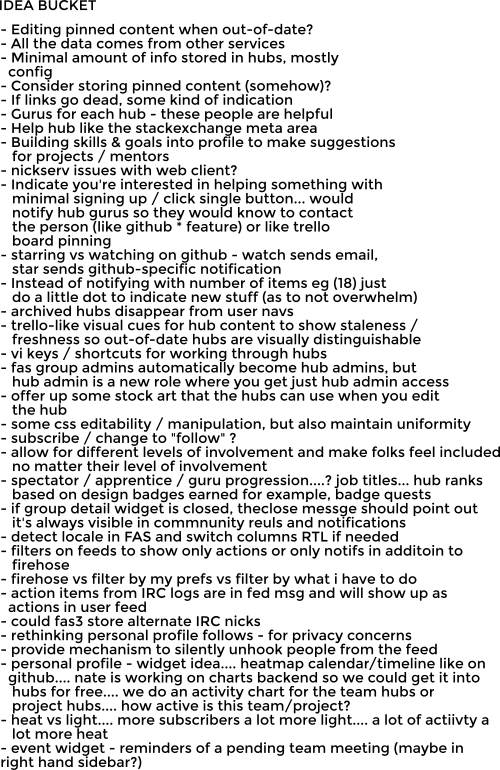 I was worried that this wouldn’t work well in a video chat context, but I screen-shared my Inkscape window and wrote down suggestions as they were brought up and I think we came out with a useful list of ideas. I was actually surprised at the number of pains and gains on the experienced contributor side: I had assumed new contributors would have way more pains and gains and that the experienced contributors wouldn’t have that many. 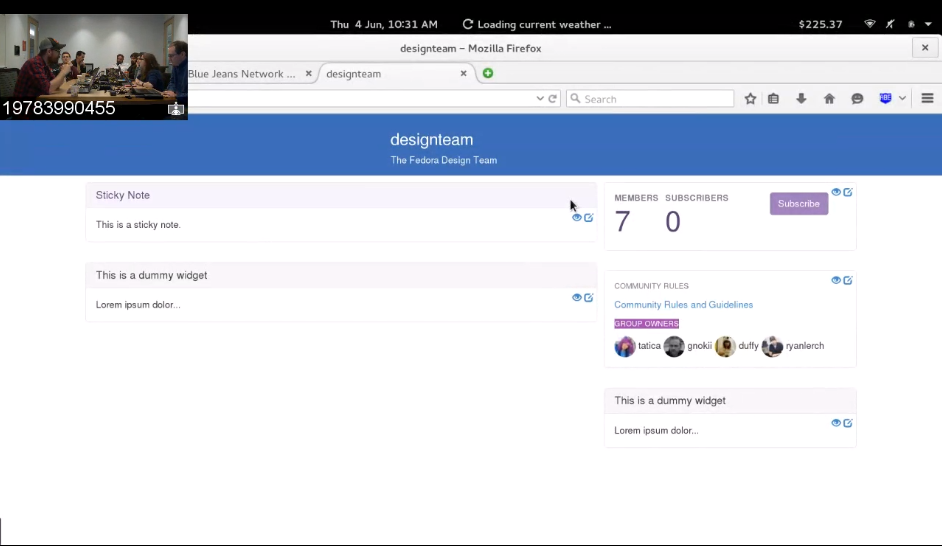 Ralph gave us a demo of his Fedora Hubs prototype – first he walked us through how it’s built, then gave the demo.

In the README there is full explanation of how the prototype works so I won’t reiterate everything there. Some points that came up during this part of the meeting: 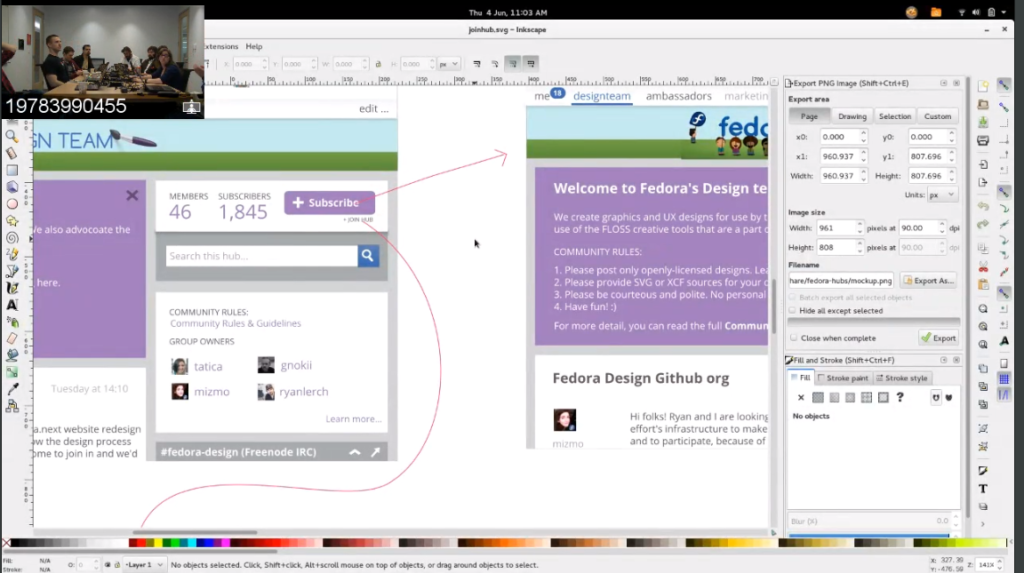 Next, Meghan walked us through the latest (at the time 🙂 we have more now!) mockups for Fedora Hubs, many based on suggestions and ideas from our May meetup (the 2nd hubs video chat.)

(Skip directly to this part of the video)
First, she walked us through her mockups for creating/editing hubs – how a hub admin would be able to modify / set up their hub. (Mockup (download from ‘Raw’ and view in Inkscape to see all screens.)) Things you can modify are the welcome message, colors, what widgets get displayed, the configuration for widgets (e.g. what IRC channel is associated with the hub?), and how to add widgets, among many other things.
Meghan also put together a blog post detailing these mockups.
One point that came up here – a difference is that when users edit their own hubs, they can’t associate an IRC channel with it, but a nick and a network, to enable their profile viewers to pm them.
We talked about hub admins vs FAS group admins. Should they be different or exactly the same? We could make a new role in FAS – “hub admin” – and store it there if it’s another one. Ralph recommended keeping it simple by having FAS group admins and hub admins one and the same. Some groups are more strict about group admins in FAS, some are not. Would there be scenarios where we’d want people to be able to admin the FAS group for a team but not be able to modify the hub layout (or vice-versa?) Maybe nesting the roles – if you’re a FAS admin you can be FAS admin + hub admin, if you’re a hub admin you can just admin the hub but not the FAS group.
Another thing we talked about is theming hubs. Luke mentioned that Reddit allows admins to have free reign in terms of modifying the CSS. Matthew mentioned having a set of backgrounds to choose from, like former Fedora wallpapers. David cautioned that we want to maintain some uniformity across the hubs to help enable new contributors – he gave the example of Facebook, where key navigational elements are not configurable. I suggested maybe they could only tweak certain CSS classes. Any customizations could be stored in the database.
Another point: members vs subscribers on a hub. Subscribers ‘subscribe’ to a hub, members ‘join’ a hub. Subscribing to a hub adds it to your bookmarks in the main horizontal nav bar, and enables certain notifications for that hub to appear in your feed. We talked about different vocabulary for ‘subscribe’ vs ‘join’ – instead of ‘subscribe’ we talking about ‘following’ or ‘starring’ (as in Github) vs joining. (Breaking News 🙂 Since then Meghan has mocked up the different modes for these buttons and added the “star” concept! See below.)

We had a bit of an extended discussion about a lot of the different ways someone could be affiliated with a team/project that has a hub. Is following/subscribing too non-committal? Should we have a rank system so you could move your way up ranks, or is it a redundant gameification given the badge system we have in place? (Maybe we can assign ranks based on badges earned?) Part of the issue here is for others to identify the authority of the other people they’re interacting with, but another part is for helping people feel more a part of the community and feel like valued members. Subscribing is more like following a news feed, being a member is more being part of the team.

(Skip directly to this part of the video)
Next Meghan walked us through the mockups she worked on for personal profiles / personal streams. One widget she mocked up is for personal library widgets. Other widgets included a personal badges earned display, hubs you’re a member of, IRC private message, a personal profile.
Meghan also talked about privacy with respect to profiles and we had a bit of a discussion about that. Maybe, for example, by default your library could be private, maybe your stream only shows your five most recent notifications and if someone is approved (using a handshake) as a follower of yours they can see the whole stream. Part of this is sort of a bike lock thing…. everything in a user’s profile is broadcast on fedmsg, but having it easily accessible in one place in a nice interface makes it a lot easier (like not having a lock on your bike.) One thing Langdon brought up is that we don’t want to give people a false sense of privacy. So we have to be careful about the messaging we do around it. We thought about whether or not we wanted to offer this intermediate ‘preview’ state for people’s profiles for those viewing them without the handshake. An alternative would be to let the user know who is following them when they first start following them and to maintain a roster of followers so it is clear who is reading their information.
Here’s the blog post Meghan wrote up on the joining hubs and personal profile mockups with each of the mockups and more details.

(Skip directly to this part of the video)
The main horizontal navbar in Fedora Hubs is basically a bookmarks bar of the hubs you’re most interested in. Meghan walked us through the bookmarks mockups – she also covered these mockups in detail on her bookmarks blog post.

ZOMG THIS IS SO AWESOME!

Yes. Yes, it is.
So you may be wondering when this is going to be available. Well, we’re working on it. We could always use more help….

How does one help? Well, let me walk you through where things are taking place, so you can follow along more closely than my lazy blog posts if you so desire:

How can I help?

Well, I’m sure glad you asked. 🙂 There’s a few ways you can easily dive in and help right now, from development to design to coming up with cool ideas for features / notifications:

There are many other ways to help (ask around in #fedora-hubs to learn more,) but I think these have a pretty low barrier for starting up depending on your skillset and I think they are pretty clearly documented so you can be confident you’re working on tasks that need to get done and aren’t duplicating efforts!
Hope to see you in #fedora-hubs! 🙂