I emailed Aurélien early this week to see if I could help with HyperKitty. He said he would appreciate a UI review for mistakes and some help with icons too. Since it has been a very long while since I’ve been involved with HyperKitty, and a few months since I checked out the HyperKitty test server, I decided to do a review of sorts of the whole UI, check out how it works now, and brainstorm some ideas to make it better.

Mapping Out the UI

So first I clicked like a maniac and got a feel for the overall site structure. Then I drew up a site map to document the structure: 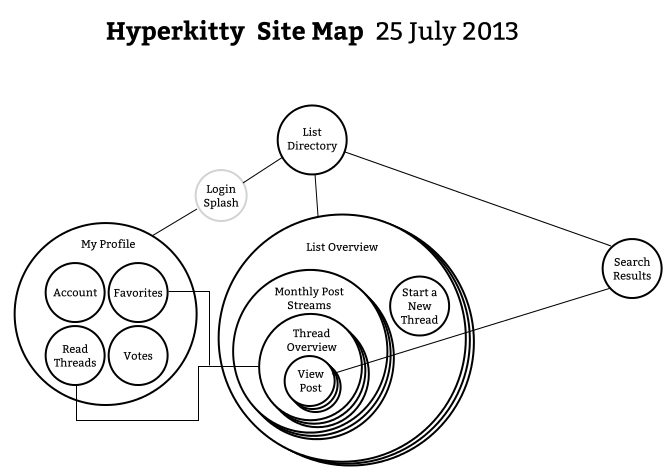 Thinking through the design as I was clicking through it, I noticed a two major-ish features that I thought would make the app better:

There’s a few other things I noted that I’m not going to dive into as much in this post because I haven’t done any further thinking or sketching around them:

Okay, so with the user profiles and category/tag listing ideas in mind, I drew up a potential future site map to show how those features could fit into the existing UI:

One of the other things I noticed in my review of the UI is that the list directory page (‘available lists’) didn’t seem very scalable, and all of the mailing lists were given a visual treatment such as they were equal when they aren’t, necessarily. (I did actually originally mock up the list directory close to how it appears today and completely forgot about it. Here is a clear example then, of a designer disagreeing with her past self 🙂 )
Anyway, this last point about unequal lists appearing visual equal is most severe in the current mailman list UI: 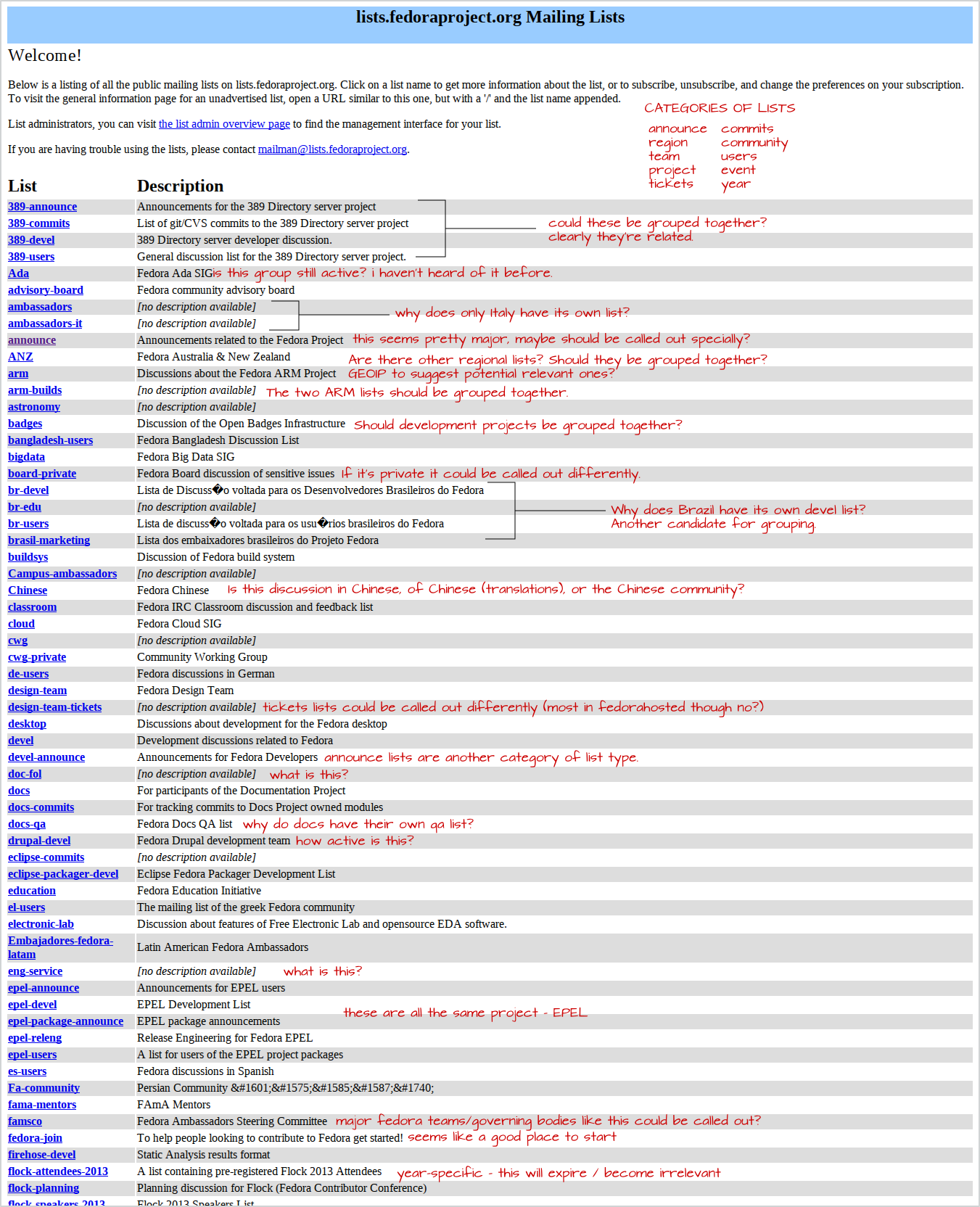 Some of the things I noticed reviewing the current Fedora (old) mailman full list directory:

I wanted to play around a little bit with the idea of categorizing lists. So I went through the full list of current Fedora mailing lists and made a bit of an analysis of them, sorting them into different buckets and coming up with category names for them. At first, I had one category for SIGs + projects, but quickly came to realize the vast majority of lists were going under that bucket, so I ended up splitting out SIG lists and project lists into two separate categories. Here’s my little sketch of lists and categories – do you agree with the categorizations? Did I miss anything? 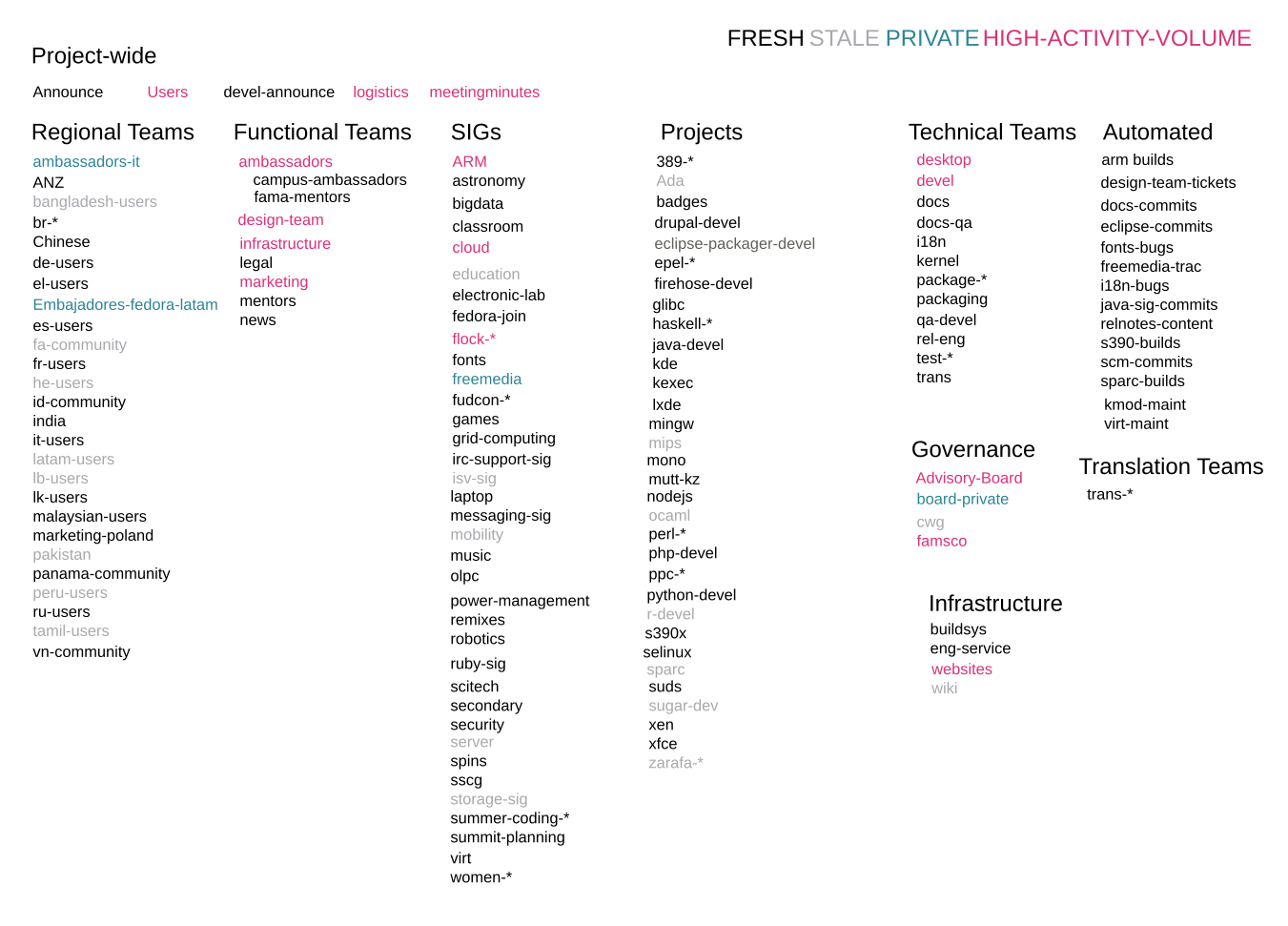 Now that I had a nice set of categories and lists to go under them, I started playing with how they could be displayed in the list directory in HyperKitty: 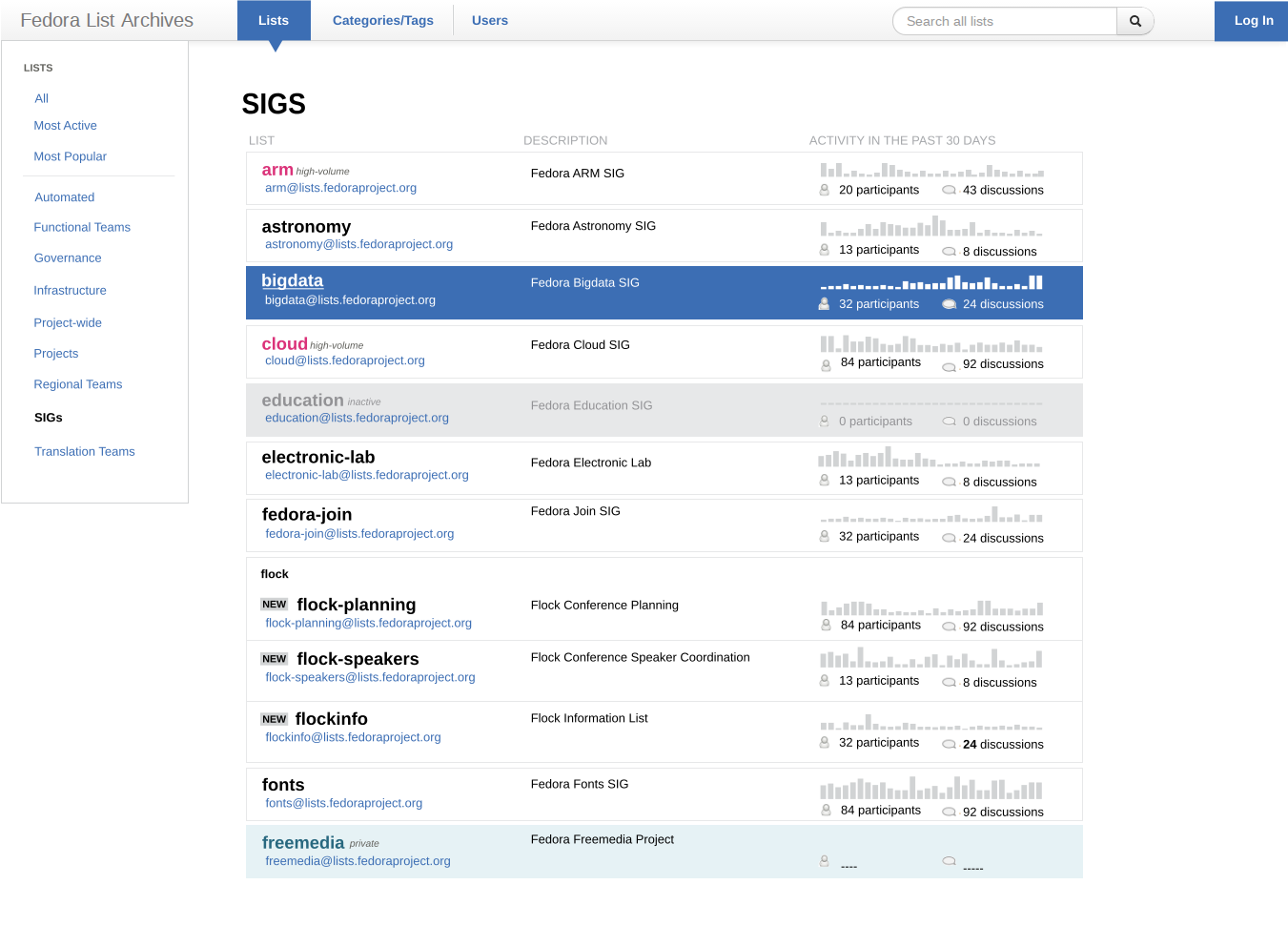 A few things about this mockup:

All right. I guess that’s enough for now. I dipped my toe a teensy tiny bit into mocking up a category/tag directory page, but there isn’t anything worth showing yet. Anyway this is my thinking on HyperKitty this week. Let me know what you think!